Cambodia officially known as the Kingdom of Cambodia and once known as the Khmer Empire, is a country located in the southern portion of the Indochina Peninsula in Southeast Asia. Its total landmass is 181,035 square kilometres (69,898 sq mi), bordered by Thailand to the northwest, Laos to the northeast, Vietnam to the east, and the Gulf of Thailand to the southwest.

With a population of over 14.8 million, Cambodia is the 70th most populous country in the world. The official religion is Theravada Buddhism, which is practiced by approximately 95% of the Cambodian population. The country's minority groups include Vietnamese, Chinese, Chams, and 30 hill tribes.[9] The capital and largest city is Phnom Penh, the political, economic, and cultural center of Cambodia. The kingdom is a constitutional monarchy with Norodom Sihamoni, a monarch chosen by the Royal Throne Council, as head of state. The head of government is Hun Sen, who is currently the longest serving non-royal leader in South East Asia and has ruled Cambodia for over 25 years. 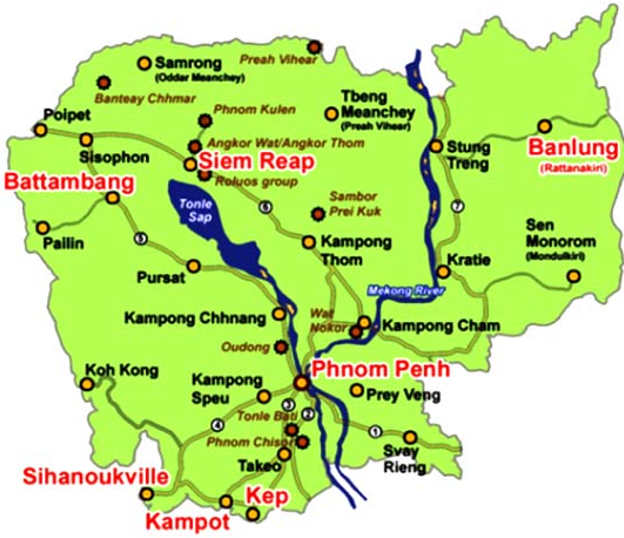 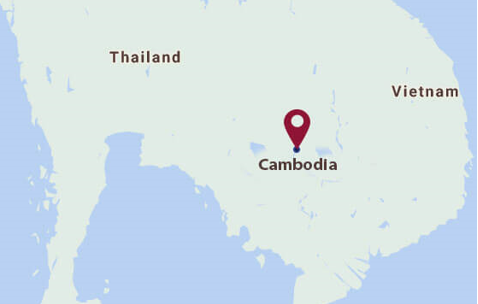 Cambodia's ancient name is "Kambuja". In 802 AD, Jayavarman II declared himself king marking the beginning of the Khmer Empire which flourished for over 600 years allowing successive kings to dominate much of Southeast Asia and accumulate immense power and wealth. The Indianized kingdom built monumental temples including Angkor Wat, now a World Heritage Site, and facilitated the spread of first Hinduism, then Buddhism to much of Southeast Asia. After the fall of Angkor to Ayutthaya in the 15th century, Cambodia was ruled as a vassal between its neighbors until it became a protectorate by the French in the mid-19th century. Cambodia gained independence in 1953.

The Vietnam War extended into Cambodia, during which the Khmer Rouge took Phnom Penh in 1975 and later carried out the Cambodian Genocide from 1975-1979 when they were ousted by Vietnam and then fought against the Vietnamese backed People's Republic of Kampuchea in the Cambodian–Vietnamese War (1979-1991). Following the 1991 Paris Peace Accords Cambodia was governed briefly by a United Nations mission (1992-1993). The UN withdrew after holding elections in which around 90% of the registered voters cast ballots. The 1997 coup placed power solely in the hands of Prime Minister Hun Sen and the Cambodian People's Party who remain in power as of 2013.

Cambodia has since had one of the best economic records in Asia, with economic growth averaging 6 percent for the last 10 years. Strong textiles, agriculture, construction, garments, and tourism sectors led to foreign investments and international trade.[11] Oil and natural gas deposits found beneath Cambodia's territorial waters in 2005 remain mostly untapped, due in part to territorial disputes with Thailand.[12][13] Despite economic improvements as of 2013 the Human Development Index (HDI) ranks Cambodia 138th place (tied with Laos) in terms of human development indicating that Cambodia has medium to low development presently Anyhow, Cambodia today is the real peaceful country in Southeast Asia and has received millions of tourists all round the year.

View Us on Tripadvisor 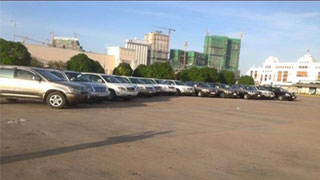 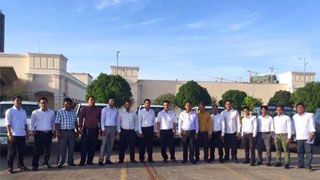 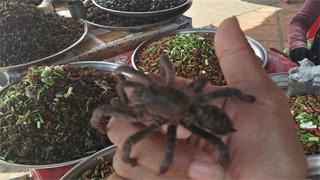